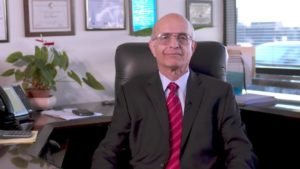 Dr. Yoram Neumann (May 11, 1947 – April 14, 2020) will always be known as an online education pioneer who developed many of the concepts now used in online education. He spent a lifetime championing the transformative power of education and remains an inspiration and a guide to those who work in higher education

The husband and wife team dedicated a professional career with the idea that all people should have access to affordable, high-quality education. They sought to educate adult learners, professionals, and the underserved, championing a commitment to social justice, intellectual pursuit, and service to society.

The pair won a Gold Hermes Creative Award in 2013 for an article published in the Journal of College Teaching & Learning on The Robust Learning Model. The international competition awards professionals involved in the concept and design of educational materials and programs, as well as emerging technologies.

A Groundbreaking Career in Education

Born May 11, 1947, Dr. Neumann achieved many milestones in the world of academics and research during his long career. He held a wide variety of leadership positions, including President and CEO of United States University; Executive Vice President and Provost for California State University, Dominguez Hills; Director, Graduate Program in Technology Strategy and Policy at Boston University; and Dean, College of Humanities and Social Sciences at Ben-Gurion University in Israel.

The founding of Touro University International in 1998 ranks among his highest achievements. In addition to offering the first accredited doctorate program online without residency requirements, the school developed an innovative online learning system based on a design by Dr. Neumann.

He called this the Robust Learning Model. It became a pillar of online higher education, opening the door to the development of online learning systems for degree programs at all levels. Drs. Neumann centered the model on the needs of adult learner students. They established high standards for academic performance, student retention, and graduation rates across all degree programs.

When he and his wife received the Gold Hermes Creative Award, Dr. Neumann said: “Our goal with this article was to aid in the enhancement of online learning practices and we are very excited that Hermes Creative Awards have recognized our contribution to online education.”

From 1998 to 2009, Drs. Neumann led Touro University International to great success. More than 14,000 students graduated from the school’s online degree programs. By 2009, the school offered more than 50,000 course registrations. Dr. Neumann, who served in the Israeli Defense Forces, also focused on attracting many government and military students to Touro.

Through it all, Dr. Neumann built TUW on Judaic values that include promoting social justice and social change, freedom for intellectual pursuit, service to society, and support for the underserved. He and Dr. Edith Neumann built the school on the scholar-practitioner model, promoting an education that gave students practical experience as well as academic theory.

In addition to revolutionizing online education, Dr. Neumann worked as a scholar and researcher, authoring or co-authoring many books and publishing peer-reviewed articles on topics that included management, business administration, and higher education.

The school, in a tribute to Dr. Neumann shortly after his death, wrote that “not enough words to express Dr. Yoram Neumann’s achievements, contributions to the academic world and society as he was a larger than life thinker; he was just a great man that cared about humanity.”