Does Social Media Cause Depression? 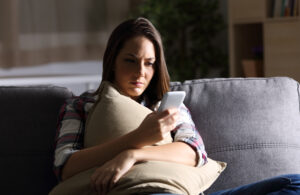 With an estimated four billion people using social media worldwide, social media depression has become a front-burner issue for mental health professionals. It’s also one of the main focuses for graduate students in a Master of Arts in Psychology program with a concentration on media psychology.

The Popularity of Social Media

More people around the world today use social media than do not. That’s a remarkable statement considering social media did not exist until the last few years of the 20th century. Its popularity has grown quickly in the past two decades, with 51% of the world’s population now registered with at least one social media site.

The most popular sites include the following (number of users worldwide in parentheses).

Most of the largest platforms are US-based. Snapchat, Pinterest, Reddit, Twitter, and Quora also ranked in the Top 20 social media sites. China is home to WeChat, the social network QQ, and the video-sharing app Douyin, each with hundreds of millions of users. The European service VK and Japanese service LINE also have millions of users.

The Connection Between Social Media and Depression

The above numbers look great from a business perspective. But psychologists and mental health professionals may find them alarming. More than half the world now exposes itself daily to an experience known to cause mental health challenges. All this is happening in a relatively short time.

To understand the impact of social media, it’s important first to know the definition of depression. The Mayo Clinic defines depression (major depressive disorder) as a “mood disorder that causes a persistent feeling of sadness and loss of interest.” It can impact how a person thinks, feels, and behaves. It can lead to problems with concentration, sleeping, eating well, decision-making, and doing daily routines. At its worst, depression can lead to feelings that life is not worth living.

Depression is not a weakness or something people can “snap out” of, but a condition that requires long-term treatment.

Recent research validates the idea of social media depression. Most studies have focused on separating causation from correlation. The former indicates social media increases the risk of mental health issues. The latter indicates that depressed and lonely people are more likely to be on social media. In this case, social media platforms are a symptom of depression, not the cause.

The most recent studies point to causation. A 2015 survey of 736 college students found that Facebook triggers feelings of envy and that envy leads to symptoms of depression. A 2019 study from the United Kingdom found that people who checked Facebook late at night lost sleep and were more likely to feel depressed and unhappy.

The University of Pennsylvania Study

In 2018, the University of Pennsylvania hosted the most impactful research into the nexus between social media and depression.  The study involved splitting a group of 143 students into two groups for three weeks. One group continued normal social network activities. The second limited their access to social media to just 30 minutes a day (10 minutes each on Facebook, Instagram, and Snapchat).

Everyone involved used iPhones. Researchers tracked phone usage data to ensure each group participated as planned. In just three weeks, the group that used less social media had better mental health outcomes. As such, the research study suggests that less time on social media led to fewer feelings of unhappiness and depression.

Fear of Missing Out

Researchers titled the University of Pennsylvania study: “No More FOMO: Limiting Social Media Decreases Loneliness and Depression.” FOMO refers to Fear of Missing Out. FOMO in social media causes people to constantly check and recheck their social network feeds to avoid missing anything.

People also check their feeds because getting a “like” and other experiences on social media releases dopamine into the brain. People get this “feel-good” chemical naturally through exercise and is also released with recreational drugs and gambling.

“Studies have shown that the constant stream of retweets, likes and shares from these sites affect the brain’s reward area to trigger the same chemical reaction as other drugs, such as cocaine,” according to the Addiction Center.

A Master Degree in Media Psychology

Earning an online Master’s Degree in Psychology with Concentration in Media Psychology prepares graduates to understand social media depression and other media-related issues such as “fake news.”

Graduates from the 100% online program often pursue careers in media companies (including television, radio, and movie studios), marketing, and advertising. Some also work with schools and organizations, creating educational material on media psychology.

Does social media cause depression? Research tells us the answer is clearly yes. With the growth of social media depression and other media-related mental health issues, the need for experts in media psychology has never been greater. For those motivated to careers in this important field, a master’s degree in this specialization can set them on the path to achieving their goals.