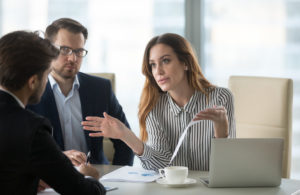 As any manager will attest, it’s impossible to have a large group of people under one roof without strong conflicts emerging between people, teams, and departments. This dynamic applies as much to the workplace as it does any large family, social group or organization.

Fortunately, a formal process has evolved with steps to resolve workplace conflict. With disputes on the rise, it’s important to have people in place with expertise in how to best apply this process to different situations.

Human resource professionals can now choose to specialize in the field, learning the latest techniques, strategies, and steps to resolve workplace conflict.  They can do so by earning a Master of Arts in Dispute Resolution and becoming a key player in better managing the inevitable disputes and conflicts that impact the workplace.

Why Resolving Conflict Is Critical to Business

“Conflict can occur in any organization when employees with different backgrounds and priorities work together,” according to the Society for Human Resource Management (SHRM). “Conflict can be expressed in numerous ways such as insults, noncooperation, bullying and anger. Its causes can range from personality clashes and misunderstood communication to organizational mismanagement.”

Unfortunately, employees say workplace conflict is on the rise. SHRM notes that only 25% of employees in 1998 reported rude treatment from co-workers at least once a week. In 2011, that number increased to 55%. In 2016, it reached 62%.

SHRM reports “heightened tension over conflicting political views” may account for the escalation in rude behavior. Whatever the case, workplace conflict can manifest in many ways. They include whole departments refusing to work together, important team members quitting or withdrawing from projects, and (at the worst) public screaming matches between co-workers.

The first step to resolving conflict involves understanding its importance. Conflicts left unresolved fester. They may lead to even worse conflict, such as emotional outbursts, if not brought into the light and discussed.

They also list potential steps to resolve workplace conflict. They include:

Easier said than done, of course. A person with expertise in conflict resolution is needed to successfully oversee this process.

What You Learn in the TUW Master’s Program

TUW designed the MA in Dispute Resolution to prepare graduates for success in the expanding field of dispute resolution. The degree program provides the skills and knowledge to become an arbitrator or mediator, as well as fact-finder, facilitator, and ombudsman.

Those who already work in other professions also enter the program to hone their dispute resolution skills. They include managers, union representatives, attorneys, advocates, and consultants.

Coursework in the program covers a wide range of dispute resolution issues, including the following.

Students learn how to compare the different methods of dispute resolution and how to apply the proper method to the situation. For example, graduates know the differences between settling disputes with negotiation and arbitration. They also have a thorough understanding of the ethical issues involved in taking a lead role in dispute resolution.

With the convenience of online degree programs and the myriad opportunities in the dispute resolution field, the MA in Dispute Resolution program provides those who aspire to work in this engaging field the knowledge and skills they need for success.