Communicating With Teens Impacted by Cyberbullying 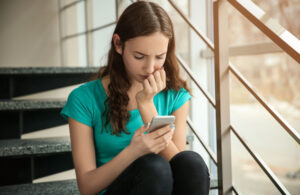 While the global network of instant communication provided by the internet offers many benefits, cyberbullying ranks among the worst downsides. Research shows that more people than ever post something on the internet, usually on a social media site, meant to inflict harm on the recipient.

These posts seek to shame, embarrass, threaten, or otherwise hurt the intended target, especially when it involves cyberbullying and teens. Unfortunately, the sweeping reach of the internet allows people to achieve those nefarious goals very effectively, leaving their victims with a long list of complicated symptoms to overcome.

Cyberbullying continues to increase among people of all ages, but the psychological impact is often the worst for teens. Communicating with teens about cyberbullying is essential for therapists working with families or providing services to schools.

Students earning a Master’s Degree in Marriage and Family Therapy are well versed in cyberbullying and teens. Even though social media platforms have stepped up anti-bullying policies on their sites, it still happens at an alarming rate.

Cyberbullying and Teens: A Growing Problem

A 2021 study by the Cyberbullying Research Center found that while people of all ages find themselves on the receiving end of bullying, it happens most often with teens. The study, which involved a survey of more than 2,000 teens, found that cyberbullying rates are highest at ages 13 to 15 and begin to taper off in the later teen years. Still, 20.2 percent of 16-year-olds and 16.2 percent of 17-year-olds reported getting cyberbullied in the past 30 days.

Transgender teens are cyberbullied at higher rates than males and females, as are those with sexual orientations that are not heterosexual. As for the demographic characteristic of race, multiracial and Caucasian teens had the highest rates of being cyberbullied, followed by Hispanic and Black teens.

The center reports that cyberbullying incidents have increased 40 percent since the COVID-19 pandemic began.

The center points to research in the last 15 years showing that cyberbullied teens “are more likely to struggle academically, emotionally, psychologically, and even behaviorally.”

Cyberbullying is now considered a public health problem, with incidents doubling between 2007 and 2019. People bully others online in various ways, as listed by VeryWell Health.

Using inflammatory or offensive language about someone in hopes of getting a reaction.

Sharing personal or embarrassing information about someone else on the internet.

Trolling involves posting offensive or derogatory comments about people or groups of people to elicit an embarrassing reaction.

This old-fashioned form of bullying has migrated to social media and messaging apps, where 42 percent of teens say they have been called an offensive name.

Telling lies about someone else is another classic bullying tactic, but cyberbullying takes this to a new level. The internet’s reach allows lies to spread exponentially at the press of a button.

Talking to Teens About Cyberbullying

Against this backdrop, it’s easy to see the need to talk to teens about cyberbullying. The consequences of ignoring the issue are high. Teens who suffer through cyberbullying experience many adverse effects.

Parents and families have many sources to monitor for cyberbullying. They include social media, text messaging via phones or messaging apps, online chats and direct messaging over the internet, message boards (such as Reddit), online gaming communities, and email.

In communicating with teens victimized by cyberbullying, parents are urged to tell teens not to respond and contact the school if the issue originated there (such as with a classmate). Parents should contact the police for more serious incidents involving threats of harm. They also should record incidences of cyberbullying in case those who do the bullying delete their posts.

Establishing transparency with teens using social media and messaging apps is essential. If parents know what types of social media their kids use, they can better monitor what they do and watch for signs of any issues.

Cyberbullying is dangerous, hurtful, and on the rise. Graduate students in a Masters in Marriage and Family Counseling degree program can help counter this trend.  As they study the effects of cyberbullying and learn the steps therapists can take to help bullying victims. It’s a skill set that will serve them well in their counseling careers.