How Therapists Can Help Children Deal With Effects of Cyberbullying

by / Friday, 26 June 2020 / Published in Health and Human Services, Psychology 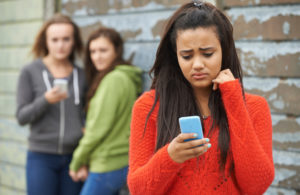 All forms of social cruelty have psychological impacts on the target. However, some experts believe the effects of cyberbullying have a more profound impact than traditional bullying, especially on children and teens who may have no idea who is attacking them or why.

Psychologists who work with children and teens can provide a great deal of support for those impacted by bullying. There are many such students. About 15% of high school students in the United States report getting cyberbullied, according to a 2017 study from the Centers for Disease Control and Prevention (CDC).

That number does not include the people who did the bullying and those who witnessed it. They, too, feel the effects of cyberbullying.

Psychologists can help those impacted by bullying through the application of what they learn in psychology programs that provide concentrations in education and working with children. These programs prepare psychologists with the best practices for helping children and teens deal with the effects of cyberbullying.

The Centers for Disease Control and Prevention in 2014 defined the core elements involved when people engage in bullying, no matter what form it takes. They are:

Bullies act in two modes, the CDC reports. The first is direct, in which the bullied person is present. The second is indirect, such as spreading rumors. Direct bullying can take the form of physical or verbal abuse. The indirect method can result in damage to a person’s reputation or relations with other people. Bullying can also result in damage to property.

In some cases, a bully may go as far as engaging in criminal actions such as hazing, assault, and harassment.

How People Cyberbully Others

When people bully others online, it most often involves verbal aggression, according to StopBullying.gov. This includes making threats or harassing comments. Another common method is relational aggression, a form of indirect bullying. It typically involves spreading rumors about someone through social media.

In some cases, indirect bullying can lead to hacks of a person’s private online information. This information is sometimes modified or disseminated to others.

A key difference with cyberbullying is anonymity. It emboldens those who feel free to say or do what they want with no fear of consequence. The situation worsens for those who get bullied. They may feel helpless because they do not know who launched an attack against them.

The Effects of Cyberbullying

According to a paper published in Pediatrics, the official journal of the American Academy of Pediatrics, several studies have found cyberbullying “can cause harm above and beyond traditional bullying.”

For those bullied, effects include depression, low self-esteem, sleep and eating disorders, and decreased academic scores, according to StopBullying.gov. In extreme cases, victims of bullying commit suicide or retaliate through violence (12 of 15 school shooters studied from the 1990s had been bullied).

Those who commit bullying also feel the effects. According to the American Society for the Positive Care of Children (ASPCC), those who engage in bullying have a higher risk for drug abuse, risky sexual activity, destructive behavior, and dropping out of school.

Witnessing someone else getting bullied also has a price. They skip school, use tobacco and alcohol, feel depressed, and have mental health problems at a higher rate than others, according to the ASPCC.

As for why people bully, StopBullying.gov reports they fall into two types:

Warning signs of someone who may engage in bullying include easy anger and frustration, less parental involvement, thinking badly of others, having a hard time with rules, viewing violence as positive, and having friends who bully others.

The Bachelor of Arts in Psychology offers concentrations in elementary education, secondary education, special education, and child and adolescent psychology. The curriculum includes a course called Impact of Society on Child and Adolescents that focuses on issues such as bullying, social media, technology, violence, community relations, and diversity.

Both the Master of Arts in Psychology and Master of Arts in Marriage and Family Therapy programs include courses that address cyberbullying along with other issues that impact children and families. The master’s in psychology program also includes a concentration in educational psychology.

Tagged under: careers in psychology, child and adolescent psychology