On June 4th, 2017, Touro University Worldwide held its 6th annual commencement ceremony, celebrating the accomplishments of the TUW graduates who have worked so hard to reach this monumental milestone.

The event was held in the Cypress Community Center in Cypress, California, and graduates, faculty, family, and friends from all across the nation were in attendance. Highlights from the ceremony included the National Anthem being performed by Laura Cerna and the Mulis Band, a welcome address by Dr. Sheila Lewis, a university address by Dr. Yoram Neumann, the “Veteran Friendly School Salute” award presented by MilitaryConnection.com, as well as speeches by the 2017 valedictorian Dr. Michael Eleff and the ceremony’s lauded keynote speaker, General James “Jim” Combs.

It was an honor for us to be able to have Gen. Combs as our keynote speaker for the 2017 commencement ceremony. In 2009, Gen. Combs retired as Commanding General of the 40th Infantry Division – retirement that capped off 42 years spent in uniform. During that time, Gen. Combs completed a tour in Vietnam, was appointed a Lieutenant in the California Army National Guard, and ultimately progressed through the ranks until he was appointed Commander of the California Army National Guard’s sixteen thousand service members in 2003. Since retiring in 2009, Gen. Combs has continued living a life of service to this country by investing his time in nonprofit endeavors designed to support soldiers who are returning home. It is for these reasons and so many more that we at TUW were so honored to have Gen. Combs speak at our 2017 commencement ceremony.

Another speaker we were honored to have addressing the graduates at the 2017 commencement ceremony was this year’s valedictorian, Dr. Michael Eleff. For the past 38 years, Dr. Michael Eleff, MD has been practicing oncology in Edison, NJ. Never one to settle for “good enough” Dr. Eleff attained his Masters of Business Administration from TUW at the age of 63 years young, graduating valedictorian while at the same time managing to balance his education with his highly demanding career. His message to this year’s graduates was certainly both inspirational and informative, providing them with valuable keys about how to be successful both in their careers and in their lives at large.

All told, we at Touro University Worldwide could not be prouder of the 2017 class. Their hard work and perseverance as well as the rewards that it has earned them is what TUW is all about, and we are happy to have been able to host such a wonderful commencement ceremony to commemorate their many accomplishments.

Click below to watch a video of scenes from the event:

Click below to view some photos from the event: 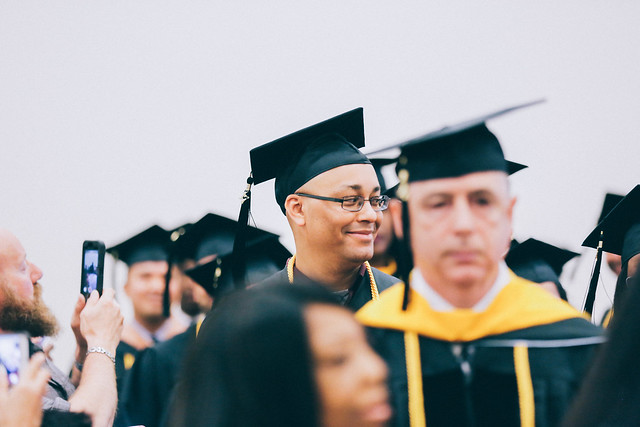